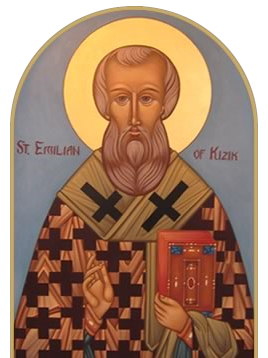 Life Of Our Holy Father Emilian

Our Holy Father Emilian was bishop of the Island Cyzikos in the Marmara Sea in Turkey from 813- 820. He lived during the reign of Leo the Armenian who was Emperor from 813-820. The Emperor Leo, not a devout man, had no regard for the truth or the orthodox faith. The Emperor, deceived by political gain and the evil one, was impressed by the military luck of the iconoclastic emperors. In 814 he asked St. Nicephorus, Patriarch of Constantinople, to call a council to reaffirm the already condemned teachings of the iconoclasts.

St Nicephorus invited Our Holy Father Emilian along with St. Euthymius, bishop of Sardis, St. Joseph, Bishop of Thessalonica, St Michael, bishop of Synnada, Theophylact, Bishop of Nicomedia, along with St. Theodore, the studite, and 270 monks including St. Lazarus, the iconographer, to meet with the emperor to discuss the matter.

During the meeting the Emperor Leo asked the bishops to no longer teach the veneration of the holy icons and directed the bishops to remove all icons from the churches. The Emperor did not use threats but earnestly asked the Bishops to agree with him in this matter for the peace of the Church. Our Holy Father Emilian was the first to speak on behalf of the Church at the meeting. He informed the Emperor that the question of the veneration of the holy icons ought to be discussed and decided only within the Church by spiritual leaders, and not by the imperial court. Our Holy Father Emilian saw that the truth could not be sacrificed for the sake of peace. And the teachings of the Church were not subject to political gain. The meeting was never completed. This began the second wave of persecution of the iconoclasm. The patriarch saw the immediate limiting of his powers. The Emperor ordered all icons to be removed from the churches and the bishops were forbidden to teach the veneration of the holy icons. Our Holy Father Emilian along with the other bishops refused to carry out the edicts of the Emperor. A year later in 815, Our Holy Father Emilian was exiled and imprisoned along with the other bishops. Many of the monks were also imprisoned or fled to the protection of the Bishop of Rome.

While Our Holy Father Emilian was in exile, he was moved from prison to prison. A blasphemy was burned into the flesh on his forehead by a heated iron. His beatings were so severe that his flesh was rotting on his body. Finally on the 8th of August in the year 820, after enduring five years of beating and humiliations for the sake of Christ, Our Holy Father Emilian joined the company of the citizens of heaven.

The Divine Liturgy was offered for the first time in the rooms of the First National Bank, in Brunswick, Ohio, on January 5, 1975 at 10 o’clock in the morning, by /s/ Emil J. Mihalik, Bishop of Parma

This inscription by Bishop Emil Mihalik within the Liturgicon on The Altar marked the beginning of St. Emilian Byzantine Catholic Church.

At a February 9, 1975 meeting of 50 parishioners, the parish patron saint was adopted. St. Emilian, the Bishop-Confessor who fearlessly denounced the iconoclasts, was imprisoned and tortured by Emperor Leo the Armenian and died in exile in 820. His Feast Day is celebrated on August 8.

During the two years that followed, a litany of religious, social and fundraising affairs followed. As the parish grew, parishioners looked for a permanent place to call home. In January 1976, with the help of St. Mary Parish in Cleveland and a Mission Gift from the Eparchy of Parma, the present 10 1/2 acre site on Substation Road was purchased. For the next 24 years our current parish hall served as both our spiritual home and activity center.

On November 28, 1998 The Most Reverend Basil M. Schott, O.F.M., D.D., Bishop of Parma joined Fr. John and Nicholas Lizanich, building coordinator, for ground breaking ceremonies. More than 200 parishioners and supporters of the church were in attendance for the picture perfect day. Once the soil was turned, the Akathist Hymn to the Mother of God was celebrated. The day concluded with fellowship and an hors d'oeuvres reception by Verba's Catering in the church-hall complex.

With site clearing completed and the footers poured, construction was underway before a Cleveland winter could stall the project. The new church featured 7500 square feet with seating for 250 people. The brick exterior features a mosaic imported from Italy of St. Emilian. Sitting atop the roof are three onion domes in the usual Slavic-style architecture. The altar, preparation tables and tetrapod were donated by St. Michael Byzantine Catholic Church in Lorain, and the pews were donated from St. Joseph Byzantine Catholic Church in Brecksville.

As construction crews put the finishing touches on the new church, the parish continued to grow as a spiritual community of love and concern for each other and those less fortunate.

On August 8, 1999 the parish was ready to call the new church home even though the interior was incomplete. On the feast of St. Emilian, the congregation welcomed Bishop Basil Schott to consecrate and dedicate the new house of worship. More than 250 parishioners and church supporters gathered to watch the bishop bless the outside four corners of the church then proceed inside for the washing of the altar and the laying of the altar cloths. The congregation then celebrated a Hierarchical Divine Liturgy. Afterward, all celebrated with an hors d'oeuvres reception prepared by Verba's Catering in the church hall.

Through the remainder of 1999 until November 2000 iconography was steadily being added. One of the first icons to be installed was Christ the Pantocrator on February 6. From that point and almost monthly, the church was transformed with the installation of each new “window into heaven”. Parishioners watched in awe as their new home unfolded before their very eyes. In August 2000 the church was adorned with three golden domes or "cebbullas" (onions - because of onion shape) atop the church. They were manufactured by Architectural Fiberglass, Inc. of Cleveland and blessed by Bishop Basil Schott at a ceremony on August 24, 2000.

As the inside continued to take shape, only one exterior feature remained to be completed - the mosaic of St. Emilian. In late October of this year, the glass tiled depiction of the church patron saint made its way from artists in Italy. After two days of installation, St. Emilian was all aglow to those passing by on Substation Road. The remaining icons were added in time for blessing at the 25th Anniversary celebration.

Into The New Millennium

As with every parish community there are times for joy and times when we have to say goodbye to someone we really love. This was the case when in April of 2003 we lost our young priest Fr. John Keblesh at the age of 37. Despite the fact that the parish was shaken during this great loss, it remained strong in spirit and continued to pray, play and work together and looked forward towards the bright future.

In 2005, our parish of St. Emilian was blessed to welcome a married priest, Reverend Marek Visnovsky and his family. Father Marek became the first married priest in the Byzantine Metropolia in 75 years.

Under the direction and leadership of Father Marek Visnovsky, the parish Finance Council and the Parish Council many new programs were started since 2005. These include lectures on iconography, week long hands on demonstration icon classes, pysanky (easter eggs decorations) classes, bible studies, Slavonic liturgies followed by paprikash dinners and fellowship, Heaven on Earth presentations, Akathist Hymns along with short talks, Moleben (prayer with supplications), continuing education for our children (ECF - Sunday School), talks to visitors from Roman Catholic Churches, annual lectures on Christian Iconography and its origins, spirituality, theology and symbolism to St. Ignatius High School students, annual Christmas retreats and hosting of "mid-lent day of reflection" for teenagers.

The parish community welcomed Cub Scout Pack 3515 into its community by granting them use of our church hall. They are active in many community outreach programs in the surrounding area.

In 2007, our parish was able to put together a remodeling project for our church hall. Since the remodeling has been completed, the church hall and the grounds have been rented by the day or the hour by members of the surrounding communities for weddings, graduation parties, baptism celebrations, organizational meetings and picnics, family reunions and business meetings.

In 2009 St. Emilian added videos to our website. These videos include various parish activities, Divine Liturgies, and Explanations of the Divine Liturgy and its different parts.

Our parish activities are open to parishioners as well as visitors. Some of the parish activities which bring us together as a community include a men's fellowship, ladies' night out, ladies' tea party, our very popular movie nights, bon fires, walking socials in Cleveland Metroparks, tobogganing in winter, annual bowling with the parish and an annual golf outing in memory of our former pastor, Fr. John Keblesh, annual craft fairs, potluck dinners including a St. Nicolas celebration and our annual church picnic.

All of these additions have enhanced our expression of our life in Christ at St. Emilian parish.

Boys and young men of our parish have always participated in our services and Divine Liturgies as altar servers. But in 2012 the girls and young ladies of our parish became more active as candle and icon bearers. We also started posting homilies and sermons online as well as two minute videos including "Words of Reflection" from Fr. Marek, as well as his special homilies - preaching to children on a monthly basis.

St. Emilian's outreach programs seem to increase each year and currently include assistance to individuals and families to purchase groceries, collections of used prescription eyeglasses, collection of items for the Battered Women's Shelter and the collection of baby items for young mothers. We also participate in the Baby Bottle Campaign to support young mothers in Medina County and we conduct men's clothing drives for St. Herman's House. We invite local scouts and religious education classes from other parishes along with their parents to our Divine Liturgy. Every Super Bowl weekend a collection is taken for the benefit of a local food bank operated by St. Martin's Catholic Church.

In November and December the parish adopts two Medina County families and provides groceries, household products and gifts of clothing and toys for the children. Parish members gather the Sunday before Christmas to wrap and deliver all of the packages.

A devoted Deacon Robert Cripps served the parish of St. Emilian for several years in this millennium until he was reassigned within the Eparchy. In 2012 Deacon John Petrus was assigned to our parish and is currently serving in that capacity.

The year of 2015 marks our 40th anniversary as a parish family praising God within the Byzantine Catholic Tradition in Brunswick and its surrounding communities. The number 40 is very significant in the Bible. Noah spent 40 days and 40 nights in the ark, Moses spent 40 days waiting on the mount for the Tablets of the Law. The Israelites spent 40 years wandering in the desert before they reached the Promised Land. In that period of time, God was not only testing their faith but He was with them to reach a time of rejoicing because He was with them through it all. Jesus spent 40 days fasting in the desert and He remained with His disciples for 40 days after His Resurrection.

After 40 years we look forward to the future by rejoicing and being inspired by Christ and being united in Christ.

What wonders will be behold beyond this cloud with a shimmering "silver" lining? Inspired by God, the parish family of St. Emilian Byzantine Catholic Church lives on in His Love pinching pierogies, preparing Thanksgiving Dinner, comforting those in need and growing in prayer. Our focus lies on that brilliant Light emanating from the horizon. As silver memories fade to a golden hue, we look with anticipation upon the moments which lie ahead firmly and fraternally establishing the "Light of the East in Medina County" as a "Beacon for the New Millennium".